A majority of sober living environments (SLEs) in the United State follow the Oxford House model. The rules for such group homes require residents to abstain from drugs and alcohol, share in the upkeep of the residence and contribute equally to rent and other shared expenses. Every person in a house must also be the same sex. None of the homes is coed because, according to the organization’s website, “Experience has shown that Oxford Houses work for both men and women, but not in the same house.”

Almost two decades of observational research by social scientists and health care providers funded by the National Institute on Drug Abuse revealed that residing in sober living environments does produce positive outcomes. As noted in the May 2010 issue of Psychological Services, sober houses provide low-cost “substance-free environment[s] where recovering individuals may live without restrictions on length of stay, and residents report that residential settings devoid of relapse triggers help them remain substance-free.”

Two reasons restricting individual SLEs to only male residents or only female residents helps foster abstinence and recovery are that single-sex populations permit better targeting of therapies and services while also increasing the physical and psychological security of alcoholics and addicts.

Men and Women Can Need Different Kinds of Help 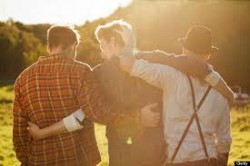 Friendship and support are important in recovery, and gender-specific homes help foster that.

When answering the question of whether gender matters for addiction recovery, Promises Treatment Centers founder Dr. David Sacks, noted that different risk factors can lead men and women to abuse drugs and alcohol. A partial list of problems women may face that send them into addiction and which most men do not includes:

Sacks also noted that men are more likely to suffer from, and need help with, behavioral disorders and antisocial tendencies. Physical symptoms of addiction can differ for men and women, as well.

Shared experiences and common difficulties allow individuals to identify with and reach out to each other. Spending months or longer in a same-sex SLE, then, can reasonably be expected to give recovering alcoholics and addicts access to a community of people who can help them make sense of their experiences and develop strategies to address issues. Targeting therapies and other kinds of assistance can also be easier for health care and services providers.

Sex Looms Large During the Early Days of Sober Living

A tenet of 12-step recovery programs is that newcomers should avoid starting a new sexual relationship for as long a year after detoxing. The wisdom of that advice will be debated forever, but living in sober house with members of the same sex makes adhering to that rule of thumb much easier for heterosexuals.

Beyond that, a fair amount of evidence hinted at by Sacks indicates that female alcoholics and addicts are much more likely than women who do not abuse drugs and alcohol to have been victims of sexual assault. Male rape and molestation victims also have high rates of addiction. This sad reality, as a group of DePaul University researchers writing in the September 2011 Journal of Interpersonal Violence noted, can make a single-gender sober living house a safe environment in which to disclose and begin recovering from such trauma.