According to the National Library of Medicine, sober houses are a tool to help those who are sober but need time to adjust to sober living. These houses are meant for those who need this time. Like many other types of rehab and care facilities, sober houses have rules. The rules are logical and tend to be fairly lenient, not the strict rules portrayed on television and in movies. Although some houses have slightly different rules most have this basic set.

No Drugs or Alcohol

Obviously since, it is a sober house drug and alcohol use is not tolerated. Most sober houses will expel anyone caught using or distributing drugs or alcohol. This is the one rule that ever sober house has in common.

No Stealing from the House or Other Residents 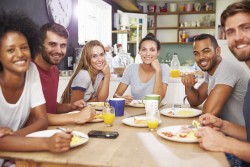 All residents of a sober house must help keep the facility clean.

This is also an obvious rule. There is no stealing from anyone in the residence. Theft is usually treated like a crime, police are called unless it can be settled internally. If you steal from another resident not only will you be kicked out but you might face legal prosecution.

No Fighting or Physical Confrontation

Everyone in a sober house is going through the same thing. Confrontation happens. Most of the confrontation is resolved by talking. If it should come to physical blows usually the police are called and it is considered an assault. Not only would you face expulsion from the program but legal prosecution as well. Physical assault is not tolerated.

You Must Take Part in Daily Living Activities such as Chores

You have to help keep the place clean when you are in a sober living facility. All of the residents take turns doing chores and making sure the place is kept up. Each person is not only responsible for their area but for the common areas as well. Many people object to this particular rule but it is in place to keep the house clean and inhabitable for all.

You are Responsible for your Own Things

Some sober houses have private rooms while others have roommates. In either case, you are responsible for your belongings. You have to take care of your room, laundry, clothing, and personal possessions. If they are left laying around theft is possible as is confiscation.

No Sexual Relations with Other Residents

Although some sober living residences are co-ed, there are rules against having a relationship with someone of the opposite sex or same sex that also lives in the same sober house. Many people get close to each other but sex with another resident usually ends in one or both of the residents being asked to leave.

What are the General House Rules of a Sober Living Home?

Group meetings, counseling meetings, and house meetings are all mandatory. Each type of meeting accomplishes a different purpose. Some decide schedules and house policies, while others are counseling sessions to help you live in sobriety.