Should I Be Looking for Female Only Sober Housing?

Traditionally, research into drug and alcohol use disorders focused on men and their relationships with addiction. It wasn’t until the 1970s and 80s that the focus shifted to women. The addiction field realized that they knew very little about women with substance abuse problems.

This meant that treatment facilities were ill-equipped to treat women or to empathize with their barriers to treatment and obstacles to sobriety. This discrepancy in information skewed drug and alcohol addiction treatment on all levels.

Although sober housing is not traditional drug or alcohol treatment, it too has been affected by the differences between male and female addicts. For this reason, gender-specific sober houses are a reality. For many recovering drug and alcohol users these closed spaces allow for better maintenance of recovery and tailor the support of the sober living community to the needs of the residents.

If you feel like you would be more comfortable in a female-only sober living residence, they are out there. For help finding them and navigating your transition into one, call SoberHouse.com at 800-373-1667 (Who Answers?) . You can get started today. 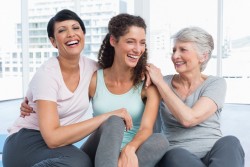 Attending sober housing with other women with similar experiences can be empowering.

In its present form, sober housing typically functions as a democratic situation, whose rules are established and enforced by its residents. Although, there are still a minority of sober houses that have a single person in a leadership position who serves in this role. Residents are allowed to stay for as long as they choose, provided they follow the rules.

The housing is subsidized by fees paid by the residents and these can often be low enough to be covered by government assistance. However, more luxurious housing is also an option.

Although there are a number of differences between male and female addicts, the following pieces of data demonstrate a few of them.

Women are less likely to seek traditional drug and alcohol rehabilitation than men. Instead, they often seek help from general and mental health practitioners. For this reason, sober housing may serve a vital role as it offers a substance-free environment, but not traditional treatment.

Women are also more likely to face economic hardships and responsibilities that prevent them from getting treatment. Perhaps, a living situation sensitive to these responsibilities (and in many cases with offerings, like daycare, that work around them) would serve as a boon to these women.

Women are more likely to have endured physical and sexual trauma followed by post-traumatic stress disorder (PTSD) than are males seeking drug treatment.

For these women, their relationship with their primarily male abusers may make them hesitant or even unable to share a dwelling with men they don’t know.

Lastly, women suffer more with the stigma attached to addiction because their social roles don’t allow them as much space to compartmentalize as men have. Sharing a living situation with peers in exactly the same social role is empowering and women in treatment deserve to feel powerful.

If you feel you would benefit from a female-only sober house, you should look into it and SoberHouse.com can help. Give us a call at 800-373-1667 (Who Answers?) and move one step closer to a housing situation that can make you feel safe and in charge of your own life for a change.